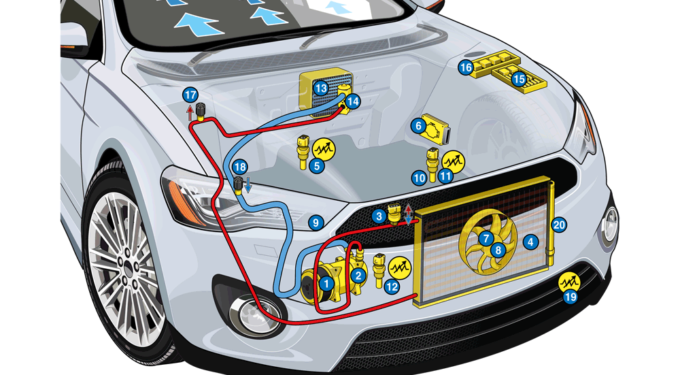 Autodata typically sees most use of the Service Air Conditioning module from early May through to late August with a peak in late June. However, with the changing climate threatening to deliver higher temperatures throughout the year, the length of time customers will be keeping their air conditioning on is likely to increase – and with it the need for service.

For some technicians servicing air conditioning can be daunting – without a strong knowledge of the basics of why AC works, it can sometimes feel like working in the dark. In this technical article we shine some light on the AC bogeyman – and hopefully show he’s not as scary as his reputation suggests!

A/C systems generally have similar parts and all have two sides, representing low and high temperature and pressure. The above diagram shows some basic components and change in refrigerant pressure/ temperature between the sides. AC systems work by compressing a gaseous refrigerant, condensing it into a high-pressure liquid, and then throttle it to a low-pressure liquid to boil and remove heat from a heat sink. There are several different means of accomplishing each of these steps, but for the purposes of the below we are giving a general overview of the purpose of each component. We are also omitting for the purposes of this analysis control devices such as sensors and switches. Compressor: This is typically a belt-driven pump. Its job is to pull refrigerant in and compress it into a high-pressure vapour. It may have an electromagnetic clutch to engage or disengage it, or it may have a spill valve to control the flow. On hybrid/EV vehicles this will usually be driven by an electric motor instead of a belt. Condenser: This is a big finned heat exchange – usually mounted in front of the radiator. This is why the high-pressure vapour is positioned immediately behind the compressor. Air passes through the fin to cool and condense the high-pressure vapour and turns it into a high-pressure liquid. Air is either motivated by the cooling fans or by air ram as the vehicle is driving. Receiver/Dryer: This is a reservoir for the high-pressure liquid. It stores and filters the refrigerant and also has a desiccant to remove water from the refrigerant. This unit is typically mounted in the condenser. Thermal Expansion Valve or Fixed Orifice: This is where the refrigerant goes when it is compressed, filtered, and condensed. The thermal expansion valve is a small orifice that the high-pressure liquid is pushed through – turning it into a low-pressure liquid. It works much like a can of spray paint – high pressure liquid inside the can sprays out as a low-pressure liquid. If you’ve ever spray-painted your hand you will feel the paint is colder than the can – this is due to the drop in pressure spreading the same amount of thermal energy over a much larger area.

Thermal expansion valves (also called TXV or just Expansion Valves) vary the size of the opening based on the temperature of the evaporator – see the diagram on the left The sensing bulb is filled with a gas that expands when warm, pressing down on the diaphragm in the valve. This pushes the valve open and allows more high-pressure liquid to spray into the evaporator as low-pressure liquid. As the evaporator cools, the sensing bulb contracts and the valve is allowed to close. In newer TXVs this is integrated into a single block, but the function remains the same.