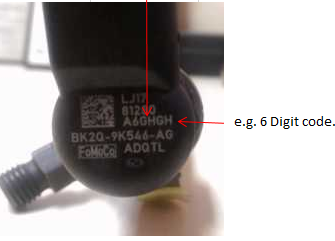 In the past, diesel injectors although cumbersome to fit, were generally seen as plug and play. However, since the introduction of common rail diesel systems, and in turn common rail injectors, the workshop can often be left confused or unsure as to whether an Injector needs coding or not.

Common rail diesel systems offers a number of advantages over traditional diesel systems, such as improved performance, lowered fuel consumption, emissions and quieter engines. Another significant advantage of a common rail system is its ability to uniquely reduce emissions. This is what Europe is striving for and the buzz word on the lips of every Eurocrat.

So why code injectors?

An injector code, typically known as an IMA code (Bosch and Siemens) or a calibration code (Delphi), is a code that is programmed to the ECU for accurate communication and Injection volume control. With ever increasing emissions legislation and tightening of limits, vehicle manufacturers have been forced to more accurately control the flow of fuel going into the engine to optimize the efficiency of the combustion process and control emissions within acceptable limits…

The IMA coding is an industry standard: Injector Menge Abgleichung (injector Quantity Offset). When an injector goes through the OE test it generates an IMA code which identifies where in the tolerance range the needle and nozzle assembly fit, this allows the ECU to vary the fuelling accordingly and optimize the engine performance. Failure to code in the injectors can result in several issues:

How do I know if the injector I have fitted needs coding?

DENSO Common Rail Injectors – As a rule, all require coding, although some very early releases may not. Typical code length is 16-24 alphanumeric characters dependent upon vehicle marquee. Code typically found on Injector head. You can also use the QR code found on the injector for this information.

VDO/Siemens Common Rail Injectors Injector’s – Only VW applications at this moment require coding. Typical length is 6 digits and found on the injector head.

BOSCH Common Rail Injectors – As a rule all require coding, although some earlier releases may not, in simple terms if an IMA code is present then the injector will need coding. Typical length of code is 6-10 digits and found on Injector head.

N.B. – The coding information above is related to new diesel Injectors. A remanufactured injector if purchased from an Authorized Field Repairer will also have a new calibration code, which is typically affixed to the injector as a sticker or label. Also adhere to correct battery voltages when coding injectors, and do not only rely on the vehicles own battery source. Connect a battery charger while doing the coding….